Following up from a previous post which looked at a breakdown of US debt, here are my thoughts on a more general framework of assessing a country’s debt vulnerability.

I suggest we look at debt along the lines of debt sustainability (private vs public) and sovereignty (foreign vs domestic). Everything else being the same, in terms of the ability of repayments, public debt is better than private debt, and domestic debt is better than foreign currency denominated debt. This is because it is possible to monetize the debt in the former (public and domestic), while not (directly) possible in the latter (private, foreign). 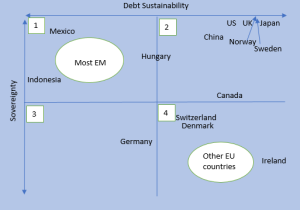 Therefore, one can discern the worst possible combination as being private and foreign debt (Quadrant 4 in the diagram above). An example of that would be Asian corporates/countries in the 1990s: because the countries had a pegged exchange system, i.e. they were not fully sovereign, even the domestic public debt would have been considered ‘foreign’, i.e. no monetization was possible. This, of course, led to the Asian crisis in 1997/98. On the other hand, the best possible combination is a sovereign country with mostly public and domestic debt. Actually, a lot of those same Asian and other emerging market (EM) countries now fall in this category (Quadrant 1). Even though, some of these countries still maintain a ‘dirty’ float, for example Indonesia (therefore not completely sovereign), their debt level is not only much smaller than before but it is also much smaller than a lot of the developed market (DM) countries. In addition, most of the EM countries have very little foreign debt.

Most of EU countries not only have a lot of private debt but they are also not sovereign because they are dependent on the ECB for monetization. In a sense, they all have only ‘foreign’ debt as their central bank is not allowed to create money and monetize. I have put Germany a bit higher than the rest of the EU countries simply because of its deemed influence on the ECB. However, Germany does have much less debt than most of the other EU countries, therefore, it is to the left of them. Actually, because the ECB ‘monetization’ came way too late, we had the EU sovereign crisis of 2011/12. And it was a sovereign (public debt) crisis for some countries directly because they had too much public debt (Greece, Italy) and for some it was indirectly because they also bailed out the private sector first (Ireland).

Japan has a lot of both private and sovereign debt but it is only domestic and the country is fully sovereign. Both US and UK have a lot of private debt but not as much public debt like Japan. However, just like Japan, their overall debt is mostly in their domestic legal tender, so they are fully sovereign.

China is a special case and it requires its own separate blog post. Suffice to say that it has a lot of ‘private’ debt in a foreign currency. However, it also has very little public debt and massive foreign currency reserves. Therefore, in theory, China can deleverage much easier the private debt (which is, actually, ‘quasi-public’ in many cases) by leveraging the sovereign – much easier than the way US, UK or EU had done during their own crises recently, or, in fact, Japan’s in the 1990s. China’s government balance sheet is cleaner in a way.

When it comes to debt vulnerability EM fairs much better than DM in general.

1 thought on “Not all debt is created equal”